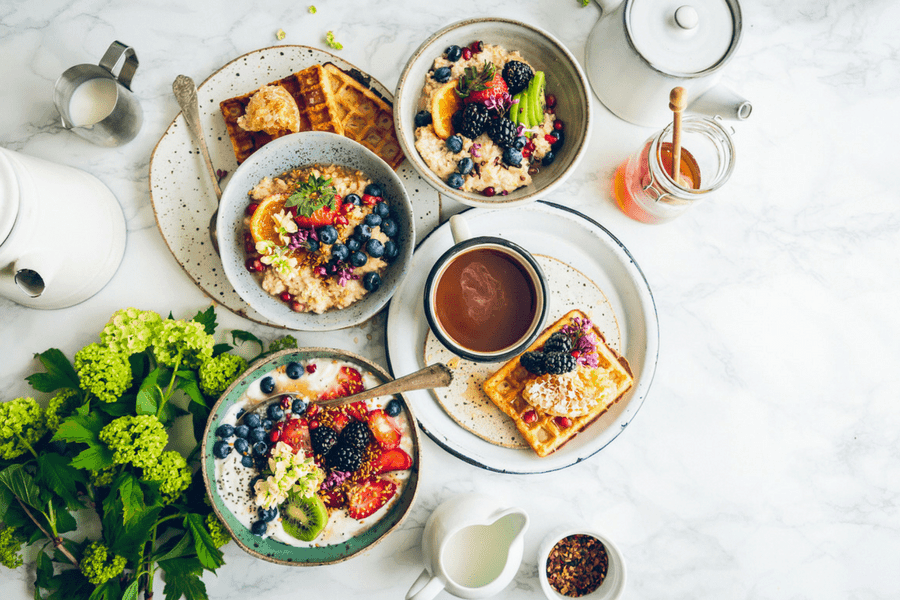 I knew from the start of this nutrition challenge, that week two was probably going to be a bit of a write off.

Our holiday, a 7-night cruise to the Pacific Islands, was planned well before the nutrition challenge came about, but I accepted the challenge nonetheless!

My goal was/is to earn 100 points throughout the 30 days and I hoped I could do that in the 3 weeks of the month that I wasn’t on holidays!  You can read about week one and how points during the challenge are earned here.

In my last post, I said that I was aiming to earn my one bonus workout point each day while away.  I packed my activewear and gym shoes, printed off my list of home workouts and was ready to get in and get it done.  Until I got there that is…

Before we left, friends told me about the food on the ship.  They said the food was good and there was plenty of it.  Whoa was that an understatement!

As someone who loves food, but has battled an eating disorder most of her adult life, and who still often finds herself challenged when faced with temptation, the food on the cruise was both an overwhelming blessing and curse rolled into one.

The main dining room onboard was called The Pantry – from memory it included eight individual outlets offering different cuisines and options, one of which was called the Sugar Bar! You could as much and as frequently as you liked.  Then there was The Waterfront restaurant that offered a different 3 course menu for lunch and dinner daily.

In addition to these two dining options that were included in your fare, there were 4 other restaurants, a grill, 2 cafés and an ice creamery on board.  Oh, and there was a lollishop and numerous bars of course!  So much food (and temptation) in one small space.

On day one I realised that although what I put in my mouth is always my choice, saying no didn’t come as easy as I hoped in this situation!

Apart from way too many desserts?  Well a bit of everything really!  We ate breakfast and lunch in The Pantry, and dinner at The Waterfront each night.

Breakfast for me usually consisted of bacon, egg, tomato and mini croissants.  And pancakes.  With syrup.  I know I know…  For lunch I usually chose some sort of roast meat and vegies, but I did also have fish with wedges, calamari, Asian noodles and sticky chicken wings throughout the week.    And dessert.  The Sugar Bar that I mentioned, it was full of desserts every lunch and dinner time. Cakes, slices, jellies, tarts, custards, meringues, even chocolate dipped bananas – you name it, they probably had it at some stage, and let’s be honest, I probably tried it too!

Dinner varied every single night, but again, I usually choose some type of meat and vegetable dish.  And dessert.  Again.  Oh, and bread rolls!  So many bread rolls!

We attended a high tea on board which was very luxurious and tasty, and also experienced a traditional morning tea and lunch while in Vanuatu, which simply consisted of fresh organic fruits and home-made sweet potato chips followed by grilled meats and salads – it was delicious!

Despite eating a lot of food I wouldn’t typically choose when at home, I did make some good choices too!  I choose meat and vegetables more often than not.   If I didn’t enjoy something, I didn’t eat it just because it was there.   I didn’t join my husband in late night snacks from The Grill, such as nachos, burgers and hotdogs.

During the entire week, I only had one cocktail – one!  I also had one soft drink, one juice (that tasted bloody awful), one milkshake and one hot chocolate.  For the rest of the time I chose water.  And lots of it!  I also turned down the vast selection of cheeses and crackers on offer each night.  That may have been because I was too full of desserts, but I turned them down nonetheless! So, it could have been worse, right?

Food aside, I did have a goal to move my body (aka exercise) each day while away.

On the first day, I headed down to the onboard gym to check it out.  I have never seen so many machines in such a small space, and being a crossfit girl (we don’t use machines) it was quite overwhelming to be honest.  I decided to stick to my home workout printouts that I brought with me.

Later that day I attempted to do burpees in my room.  Except there wasn’t enough space without me hitting either a bedside table, wall or ladder from the top bunk.  I tried to do some step ups on a chair in the room, but it was too soft and unstable.

Then I had an idea. Stairs!  There were 14 decks on our ship – that is a whole lot of stairs!  There were also 2000 people on the cruise so although you couldn’t really exercise in the stairwells, you could choose to take the stairs instead of the lift whenever you had to go between decks, which felt like about eleventy billion times a day.  No that’s not a real number but you get my point!  I can assure you that my legs got an amazing workout during our cruise! We decided to switch the lifts for stairs for the entire week.

In addition to the endless stairs we also did a huge amount of walking and exploring on the islands, particularly at Lifou.  On board gym?  No.  Home workouts?  No.  Moved my body every day while away?  Yes.

In regards to the challenge, week two was pretty much a flop.

Let’s be honest here!  Although I didn’t earn any points while away, I was much more mindful of the choices I made (whether they served me or not), and I did make some great subtle choices (such as the stairs, meat and veg options, and no drinking) to ensure I kept feeling good, and not all was lost just because I went on vacation.

Now I am back home, and back into the full swing of the challenge, currently sitting at a grand total of 31 points.

There are two weeks to go and I need to remain focussed to come close to my personal goal of accumulating 100 points during the 30 days.

I look forward to checking in next week!